A Delta Boeing 717 model from Flight Miniatures. The model is painted in Delta Air Lines’ current livery. The airline is the largest operator of the B717.

A Boeing 717-200 Delta Air Lines Model. Own one a Boeing 717 model with the livery of the largest operator of the fleet, Delta. Delta Air Lines became the largest operator of the 717 when they acquired all of AirTran’s/Southwest’s Boeing 717 jet in 2012. In 2015, they were operating all of the 717 aircraft that they acquired. The model of the jet is a plastic snap-fit that is made by Flight Miniatures.

This is good opportunity to own a piece of aviation history as Delta is looking to remove the commercial jet from its fleet as a response to the global decline in air travel. The 717 is a rare aircraft as only 156 were built. 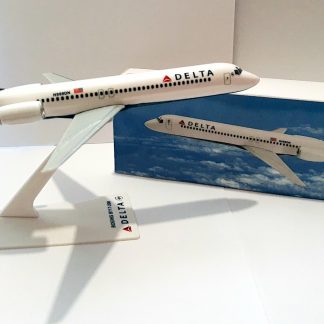