A plastic Boeing 717-200 TWA – Trans World Airlines Model from Flight Miniatures. Rare TWA 1990s to 2000s livery that the airline had before the merger with American.

A plastic Boeing 717-200 TWA – Trans World Airlines Model. This Boeing 717 aircraft model from Flight Miniatures is a rare aircraft model. TWA had purchased the 717 from Boeing at the end of 1999. From 2000 to 2001, the company operated the aircraft in its fleet. In 2001, TWA merged with American Airlines. American removed the 717 from its fleet shortly thereafter. With TWA only operating this aircraft for a year, its became a rare version of the jet. You get more background on the jet on our Boeing 717-200 TWA page. 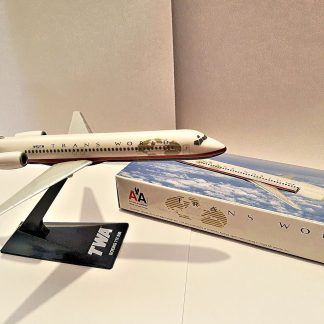